This is the first in a series of Social Media Success Stories.

Rod Phillips is the Director of Buying and Marketing for Liquor Plus. Rod was gracious enough to be our inaugural interviewee. I want to thank Rod for his candid and informative comments.

Rod recently integrated social media into his marketing strategy by blogging and using Twitter. As you will see from his comments it’s already having a positive affect on store traffic and "average ring" (retail speak for how much money a customer spends per store visit).

Chris: When did you first integrate social media into the marketing mix for Liquor Plus?

Rod Phillips: Twitter I started on July 22, 2009 after it was suggested to me by Doug Brown at Copeland Communications. As for Facebook, I have really only been experimenting over the last week. Blogging started shortly after Twitter as a supplement to our weekly TC article, but has shown enough positive results (customer reach, customer count, and increase in average ring) that we have decided to stop the weekly article and focus those monies on web/social media development. 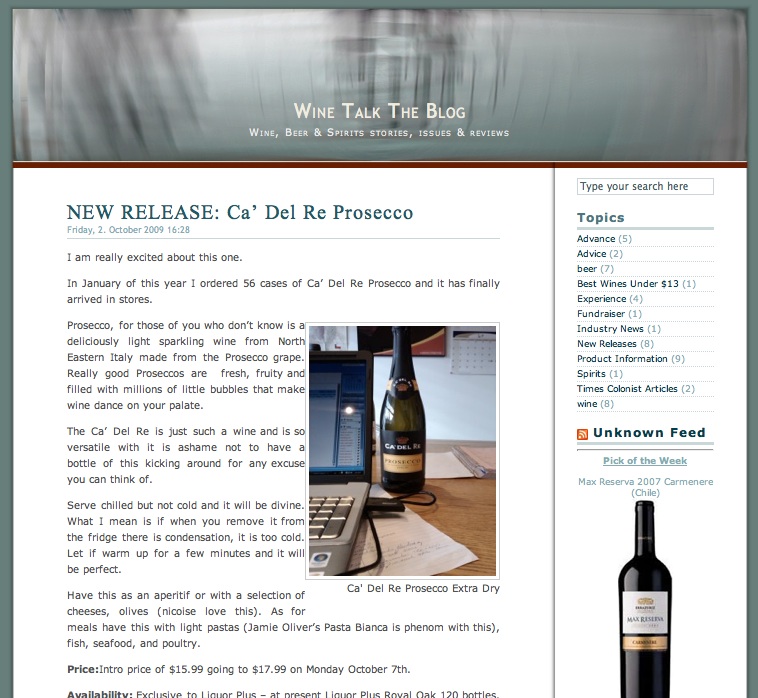 Chris: What attracted you to social media?

Rod Phillips: It was recommended to me by Doug Brown as a way to enhance customer awareness of Liquor Plus and the expertise that we offer.

Rod Phillips: Awesome, especially when enhanced by platforms like Hootsuite and Tweetdeck. I have described Twitter to other as “if you ever wanted to be a fly on the wall, Twitter is the closest thing to being a fly on a lot of walls.”

Chris: What social media tools do you currently use?

Chris: How has using social media affected your business?

Rod Phillips: Over the 6 years that Liquor Plus has been in business we have used different media to achieve different goals at different stages in our development. First there was a weekly radio show on CFAX (similar to what CFAX online is now). After 3 years we found that our customer counts were not growing and that our listenership was the same each week. We would have continued this medium if the costs were not so high. We then diverted those funds into the Wine Talk article that appears each week in the Times-Colonist.

This year we engaged Copeland Communications to help us enhance the core of our business. Through this process we decided on diverting marketing funds from the Wine Talk article to the development of a highly interactive, content rich, website that can provide our staff the direct ability to gain product knowledge while adding to the shopping experience of our customers. This came with the introduction to Twitter. 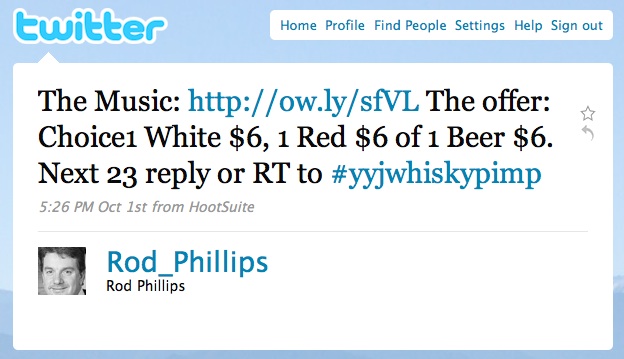 Since I started investing time into Twitter we have seen a stemming of the decline at Douglas and additional growth at our Saanich and Royal Oak locations. Remarkably the majority of people who respond to our ‘Tweet Deals’ request Douglas as their pickup store.

In addition, now that we have done a number of offers, we are seeing the average ring in all stores incline. Those that took advantage of the first offers were only collecting the offered product. I suggest that now that those picking up the offers are familiar with our stores and selection, that they are also shopping when they pick up.

The intangible that could only have a positive effect, is the hundreds of impressions that each tweet gets, not to mention the positive statements that are posted about our service, staff, selection and product knowledge. Using TweetReach the last offer received 7330 impressions. The name Liquor Plus has been seen by 12,715 individuals in the last week alone.

Chris: Do you have a particular success story you could share?

Rod Phillips: Social media was the primary driver for a fundraiser that we did in the stores. Matthew Williams is a local Saanich kids who was diagnosed with Leukemia in the spring of this year. We organized a fundraiser and publicized it through Twitter and my blog. To date we have raised over $2,000 in 4 weeks. This money will go to cover a month and some of their mortgage and household bills so that Matt’s parents and little brother can join him in Vancouver at Children’s Hospital while he undergoes treatments that will, hopefully last 1 year.

Chris: What has surprised you most about using social media?

Rod Phillips: The fact that it has offered us the ability to have on going two-way conversations with our customers. We don’t work or live in a vacuum and as such two-way conversations allow us to get better at what we do and offer, while giving us the ability to express our ‘personality’ which, of course, can not be duplicated by any other company.

Chris: On average, how much time do you spend on social media per day?

Thank you for taking time to speak with us Rod. Best of luck with your future social media endeavors.

If you work for, or know of, a company that is successfully using social media you can contact me at chris at bwest.ca or leave a comment below.

bWEST is proud to work with a wide range of clients from local startups to major brands.
To see more of our work, take a look at some of our recent case studies.